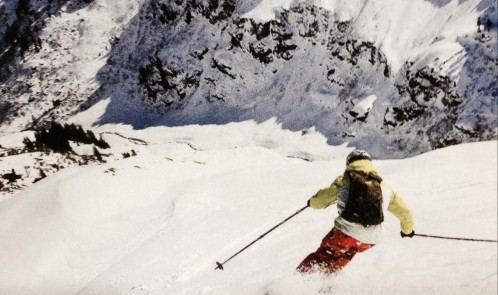 Now why is a post about skiing on a bargain blog you may think? Well if you read my About page, I do say that I am not about frugal living and all the pennies I save on a daily basis go towards treats…and one of these is skiing.

Now skiing is not a cheap holiday, but we and friends of ours do it as cheaply as possible and have learnt some tricks, so if you want to hit the slopes without breaking the bank, here are some ideas.

Even before going out on a ski holiday, get on the artificial slopes in the UK. The lessons are nowhere near as expensive as on the real mountain, but give you a little confidence before you go and that can save you wasting time and money on your holiday lessons learning the basics.

The kit for skiing can be expensive, so my favourite shops for ski gear have to be TK Maxx, Costco and would you believe it – Aldi. TK Maxx sells last season items, but who apart from the fashion elite would know that? Costco have some good kids gear and Aldi always has gloves, jackets and trousers in the winter time. We got some great Merino wool thermals for the kids from Aldi – really warm but at a price that didn’t make us shiver ;-). We also pick up old gear on eBay…it’s great for kids boots and skis…however, watch out for old skis. Some friends of ours bought some skis from eBay and they were the really slim old fashioned ones…so go to a shop to see exactly what you want first.

We go skiing fairly regularly, so we all have our own boots, helmets and skis. There’s nothing worse that skiing in hire boots that don’t fit and in the long run, it’s cheaper to have your own boots.  We even have our own skis, which Mr BH waxes himself to save some cash. We pass boots and equipment down between our kids, however if you only have one child or don’t go skiing often, hire gear. At 12 – 15 Euros for a week for boots, it’s cheaper to hire.

Often we drive. Taking the ferry (especially an overnight one) and driving is often a few hundred pounds cheaper than flying. Another trick is Eurostar…save those Avios, like I did for my summer holiday and get your travel for free or next to nothing. Also, there are plenty of discount airlines flying to Geneva during ski season.

We arrange our own accommodation. We stay with some friends of friends who we met on a holiday a few years back. They charge us about £250 for the week for four of us.

As they are far from any stores, we bring our food from the UK, so we self-cater. We take it frozen and after our 12 hour journey, it’s often just thawed. Our friends also taught us to picnic on the piste. Actually their inspiration together with the £40 we paid for four sausage and chips in a paper tray and four drinks were the reasons. From then on, we decided to take wraps, drinks and chocolate and sit on the nice picnic areas just off the piste. Funny how we never noticed them before. Obviously the odd hot chocolate or mulled wine must still be purchased in the mountainside café in the daytime.

When you do eat out, check the portion sizes, usually they are big. We often split two meals between four of us and are full and save money.

We have also stayed in big apartment blocks – soulless – but well sound proofed so we didn’t hear the partying teens and chalets where we took one room with other people…we got lucky on one of those trips and met some good friends. As we get older, we also go with friends and that is cheaper than hiring a chalet to ourselves.

Lift passes are probably the most expensive part of the trip. You can save on lift passes by buying in advance, and going for group or family tickets. If you are new to skiing, you probably don’t want an all areas pass as you won’t be skiing the whole mountain on your first go (well most of you won’t).  You can also buy tickets just for the morning or afternoon and look for offers where you get activities such as swimming and sports centres thrown in as part of the cost of your lift pass. Another trick is if you go back the following season, keep your old pass for a discount in some resorts.

Seriously, if you are a chalet person or a rep, you get free skiing and accommodation. We have friends who did it before they bought their first house (early 30s) and those who were in their 50s…up to two hours of skiing in return for some skivvying….it’s not all that bad.