Grocery shopping on a budget – save up to £40 a week 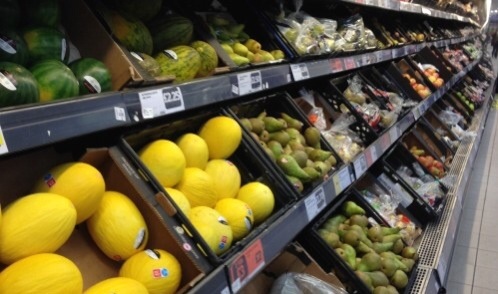 I would love to shop at M&S every day for my food stuffs, but that just isn’t feasible. Sometimes they have fruit and veg that is reduced in price because its sell by date is that day and they have also introduced a “basics range, but the other stuff is too tempting. When I do get a bargain and tell my hubby that I have bought some Maris Pipers that look good enough to eat raw for just over a £1, my excitement never seems to rub off on him.

Anyway, I received a £500 phone bill – no fault of my own (honest – my wi-fi problem!) – and decided that if I had to pay it, I needed to make some cut backs. I ended up paying only £5 of the bill.  My husband is a very good negotiator! However, until the bill issue had been resolved I decided to reduce my weekly shopping bill.

I lived in Germany in my early twenties and there I discovered Aldi. Now in Germany there is no stigma attached to shopping in Aldi. My middle class hosts shopped there every week. They picked up their essentials from Aldi and the branded goods from Kaufland. The latter store hasn’t made it to our shores, but the former helped me knock £40 a week off my shopping bill.

Aldi’s fruit, veg, flour, branded bread, milk, meat, cheese, yogurts, washing powders and confectionary are great. When shopping there, I tend to double up and go to another shop, which is a bit annoying, but I found an Aldi near to a Co-op so I walk from one to another. £40 a week is nothing to be scoffed at.

I’ve been so busy lately, that I wish Aldi delivered. I’ve resorted to Tesco – I get my Avios which have been used to pay for my summer holiday, they always have deals on, send me plenty of online discount vouchers and a mid-week delivery saver allows me to have shopping delivered cheaply during any slot as long as it’s on a Tuesday, Wednesday or Thursday.

Recently, I went into Tesco one evening and noticed a huddle of people around the end of an aisle, so my curiosity got the better of me and I went to investigate. It was 8 pm and a bunch of marked down goods were being brought out. These guys were waiting for them, so if you know the times the supermarkets bring out these goods, it’s obviously worth a trip. At Morrisons today, I got some jacket potatoes for 49p in the marked down goods section, so some stores have a permanent area for these goods.

Every month, we have a farmers market in town, but this is gourmet product and not for a bargain hunter. However, when I go into Birmingham city centre, Leicester or Dalston there are fab fruit and veg markets. I just wish I could carry more home as I am inevitably on the train. Also, I find that fruit and veg are really cheap in areas where you find the Indian restaurants clustered. There are usually big shops with onions by the sack load displayed outside and colourful displays of fresh food enticing me in.

When I visit my mother in law, she lives near and Indian area and I stock up on my spices, rice and chapati flour. I buy fresh coriander, ginger, chillies and garlic at well below supermarket prices. As I buy so much, I stick it in the blender and freeze it in ice cube trays. It’s pre-portioned, doesn’t go off and saves me a pretty penny.

Unfortunately markets and Indian supermarkets are too far for me to go though on a regular basis, so I’m going to return to a combination of Aldi and Co-op in the autumn time in prep for Christmas.