Quit smoking and save loads 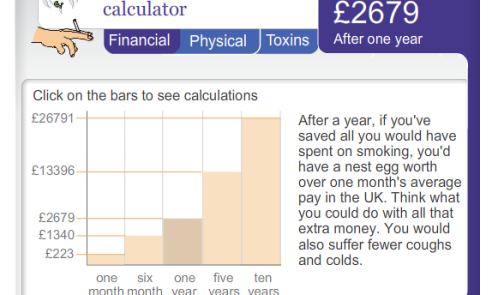 In my 20s I used to smoke, but Mr BH said it’s either me or the fags, so I gave up. As well as the health risks, smoking costs a small fortune. Check out this handy Smoking Calculator from the NHS to see how much money you could save by giving up. The image above is the saving for someone smoking 20 a day.

I figured that plenty of you will be looking to quit smoking around this time of year, so as I don’t smoke, I asked my friend, who has just given up, to give me the low down on how she is coping and saving money. I was offered some free electric cigarettes, and gave them to her, so she’s even given feedback on them.

“If, like me, your New Year resolution is to save money while getting healthier then the easiest way to do this – for smokers anyway – is to give up the evil weed. Smoking has become increasingly expensive. In fact, it is one of the only habits I can think of that people willingly spend £6-10 on every day.

There are a variety of options out there for those wanting to quit smoking. Firstly, you can visit your local GP to be referred to a Stop Smoking Clinic, or you can visit one of the mainstream No Smoking programmes being operated out of places like Boots the Chemist.

Me and a few of my friends decided to take the replacement nicotine route and, after careful consideration of the many nicotine lozenges, chewing gums, patches, gels, sprays and other products out there, we settled on electric cigarettes.

Now, I have tried lots of electric cigarettes and Mrs BH gave me some free Vapourlites. I will use these cigarettes as the main example, but would recommend that you try a few, and consider all the points I have put here.  Costing from just £3.99 for a disposable, which is equivalent to 20 cigarettes, one disposable Vapourlite should last all day. So, instead of buying a pack of 20 cigarettes for between £5.99 and £7.99 (depending on which brand you smoke), you are only ‘throwing away’ £3.99.

Vapourlites’ electric cigarettes are tiny – they will fit into a purse and a handbag, so can be carried around easily. The rubberised, textured end is comfortable to draw on and very similar to actual cigarettes, so you can avoid having that heavy plastic feeling of other electric cigarettes in your mouth. Like all electric cigarettes, they come in a variety of strengths, depending on what you normally smoke, and the ‘smoke’ being released after you draw is just water vapour so you can even smoke them indoors.

The cigarettes themselves are very smooth and easy to draw on. There is no resistance when taking a drag so they would be particularly good for anyone looking to break away from the drag that you get when smoking real cigarettes. They also look like cigarettes so are fairly realistic looking except for the blue end which lights up when you take a drag – a benefit when smoking them indoors as you don’t want people to think you’re smoking the real thing in public places.

The realistic look is good for people who want to smoke a lookalike cigarettes but bad for those who want to move away from cigarettes altogether. So, if the latter is what you want to do immediately, I suggest an alternative nicotine replacement product altogether.”