Discounts with new Two Together Railcard – great for couples 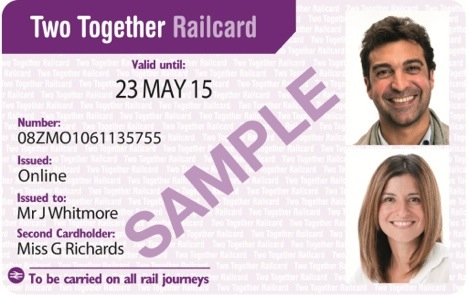 On 3 March, the Two Together Railcard was officially launched.

Now I am a fan as I was one of the people who trialled it when it was being tested a year or so ago in the Midlands.

Basically you and one other person (can be anyone) have to both have your photograph on the card to get the discount on most travel after 9.30 am and on weekends/weekends….even on advance fares.

The card’s benefits made travelling to London cheaper for me definitely. However, since the trial and the official launch, there was a lull of about a year, so I went on the hunt for an alternative.

As most of my travel to work is to London, the Network Rail Card has proved very useful. From Banbury onwards, I get a discount. I did my maths, and worked out that it costs about the same, pennies different if I split my ticket and use the Network Rail Card instead of the Two Together, if travelling with a friend.

The advantage with the Network Rail Card is that the third off is valid for up to another three adults travelling with you, and 60% off four kids too, and they don’t have to be named!

I considered how often I would take the train outside of South East and of course I do, but not enough with one specific person to buy the Two Together card.

I think it’s fab if you travel with a person regularly and outside the South East.

And because it was so good when I used it, I thought I would share a discount code for it: If you have any friends or family who you think would also like to buy a Two Together Railcard, feel free to share this code FRIENDS and they can get 10% off a one year card when they buy online till 31 March 2014.