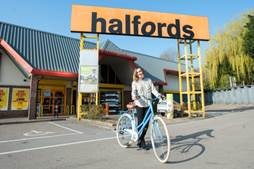 Need a new bike, but want to sell your old one? Or need to simply just get rid of your old bike while getting a new one? Want to donate your bike to a good cause?

Customers can donate unwanted bikes at any of Halfords’ 460 stores between Thursday, 16 and Monday, 20 April to receive 10% off a new bike – or simply donate a bike that is no longer needed. Bikes are then recycled and donated to communities in Africa to provide much needed transport.

Adult bikes are the most needed, but all bikes that are in a reasonable condition, including kids’ bikes, will be accepted provided they are complete with no cracks in the frame and less than 25% rust.

Re-Cycle was set up in 1997 and since then has sent over 60,000 bikes, as well as bike parts and tools, to 16 different countries in Africa where working bikes are making a difference to real lives.