Isn’t the average cost of a wedding around £14k today? Thank goodness I got married over 10 years ago.

My wedding outfit cost around £500 in all, but with the cost of weddings, and wedding dresses, soaring a low-cost option will be attractive to many brides to be….or will it?

A wedding dress has to be the most important dress you’ll ever buy or wear, but with the average dress costing hundreds or even thousands, it does seem a lot for just one day.

So could H&M’s first wedding dress – available at the end of March for £59.99 – be the answer? Despite costing a fraction of the price of the average wedding dress (£1,340, according to Brides magazine), it has high aspirations, taking “Hollywood in the 1930s” as its inspiration and promising to give brides “a real glamorous movie star look.” It even claims to have green creds, being “partly made of recycled materials”.

However, I have never seen or heard if anyone wearing these dresses. I guess what bride wants to be wearing the £59.99 dress that’s been in the news? Doesn’t feel too special does it?

But this dress is nice. I like the detailing around the neck line, the fact that it’s not shoulderless and looks like it falls nicely, but that’s just the pictures. I wonder what it looks like in real life?

Now even though I got married a while back, if I were getting married now and was on a budget, I would go to Monsoon and BHS for a dress. 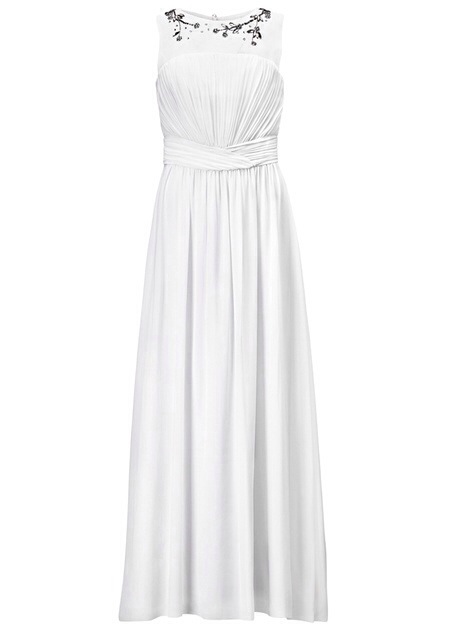