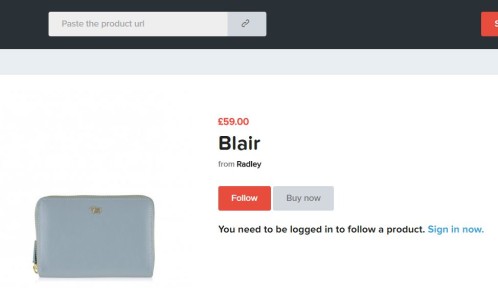 A new website that notifies users when a product they’re interested in has dropped in price has launch. The site  tracks over 250 high street an online stores, including Amazon and Tesco.

To track an item, users simply input the product’s URL on the site, add their email address and they are then notified when the price drops. The site also enables users to set a “target” price of how much they want the product to have dropped to before getting a notification.

Notifyy is the brainchild of web developer Daniel Benzie who wanted to be told when a designer clothing product he wanted to buy had dropped in price. There is another similar app that I wrote about back in 2015 for comparison. Daniel decided to build his own that he then shared privately with friends. More than 5,000 users later and Daniel has now officially launched the site.

The site tracks the 250 most popular high street and online stores, including brands such as Amazon, Argos and Tesco through to Currys, Boohoo, John Lewis, Missguided, Topshop and hundreds more. Since its launch, the site has most commonly been used to track price drops of clothing and electrical goods.

The average user of Notifyy has saved £9 per item when using the platform to track a price decrease and, collectively, users have saved over £32k since the site’s launch.

The site launch is being supported with a paid-for social media advertising campaign that aims to target money-savvy online shoppers. Notifyy is monetized via affiliate marketing tracking, meaning the company gets paid a small commission by the retailer every time a user goes on to buy a product that is being tracked via the site. Whilst the site tracks 200 stores, Daniel is now working on how Notifyy can track more complicated website prices such as those offered by holiday companies, where the pricing differs depending on a number of variables selected by the user.