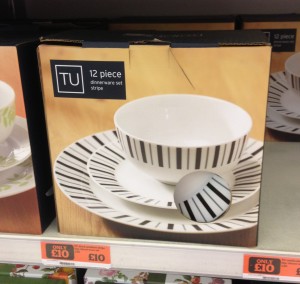 While I have a beautiful Denby set gifted at my wedding many moons ago, I am rather like most of my friends, too scared to use it every day. It’s too heavy for the kids and the replacement cost makes my eyes water.

I ended up with some nice Whittards plates, then got married and got some other random plates, but never more than four of each plate, bowl or cup.

As a grown up, I decided that I needed to bite the bullet and buy a matching set. I looked at Corelle, thinking unbreakable and long lasting, but I would need to import and even the cheapest sets were around £50 for 16 pieces, so with spares, I was looking at over £100.

M&S and John Lewis, while selling gorgeous dinner sets were still out of my desired budget, so I held out until I could find a bargain.

Then came the day! I was shopping at Sainsbury’s and they have some nice looking crockery at around £20 for 12 pieces, four bowls, four plates and four side plates – that was three years ago (in 2013 it’s £30 for a similar set!) This seemed quite reasonable and I noticed that the range was growing in time for students going to university. I decided to hold out to see if they would knock down the prices once the kids had gone off to college.

That’s when I picked my new 12 piece dinner set for £10 – I got four dinner plates, four side plates and four bowls. The price was so good that I decided to buy four sets and now have a 48 piece set for £40. Three years later, we’re down to 15 plates, 15 bowls and no one has managed to smash any side plates yet. Oh and more importantly, three years later, Sainsbury’s still knocks down the sets to £10 for four bowls, four plates and four side plates at the end of August/beginning of September! 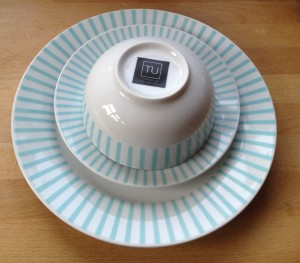